The new State Route 35 bridge was completed in October 2015 as the culmination of a $9.476-million design-and-build project for which AECOM Technical Services was the prime consultant to infrastructure contractor i+iconSoutheast. AECOM designed the new structure to be cost effective and low maintenance, and to include improved approach roadways, drainage, signing, lighting, pavement marking, and erosion and sediment control. Demolition of the existing bridge and construction of its replacement were conducted from a temporary trestle by which crews could haul away old components and deliver new materials and equipment. The two phases were completed in just 283 days—17 ahead of schedule and more than $1 million under the state’s anticipated budget.

The new two-lane structure—measuring 899 feet, 8 inches long and 41 feet, 8 inches wide—runs on Meherrin Road and crosses the Nottoway River just west of Courtland. It has two 8-foot shoulders and is built at the same location as its shoulderless predecessor, which was built in the 1920s. The bridge was built 6 feet higher at each approach end to provide clearance in the case of a 100-year flooding event and guardrails, curbed shoulders and runoff-collecting inlets were installed to improve safety. The project also featured decorative bridge lighting and the relocation of telecommunications and sewer infrastructure to accommodate a larger embankment footprint.

In addition, various precautions were taken during construction to mitigate environmental effects. The contractor purchased mitigation credits to compensate for anticipated effects on nearby wetlands, noise and time-of-year restrictions were closely followed, and great effort was taken to ensure the project had minimal effect on the area’s endangered species. 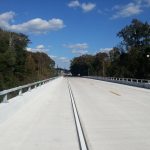 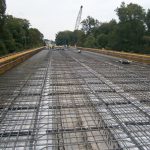 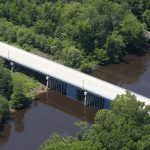 This project replaced a structurally deficient bridge in the Town of Narrows, Virginia. The bridge, crossing the New River, Route 460 and Old Virginia Avenue, was replaced with a two-lane bridge, sidewalks and bicycle lanes on both sides. In addition to replacing the structurally deficient bridge, roadway approaches on both ends of the structure were reconstructed. The total length of the project is approximately 2,270 feet, or 0.4 miles.

JMT designed bridge piers in an active river with changing water elevations. After considering several designs, drilled shaft foundations were chosen, which avoided costly cofferdams and limited river impacts.The bridge foundations were constructed in an active karst environment—a location prone to sinks, underground streams, caverns and voids. Throughout the project, JMT’s team met with Town officials and stakeholders a number of times to understand the public’s needs. Phased construction was required during the project to maintain two lanes of traffic and pedestrian access across the bridge while it was being constructed.

VDOT aptly described the project as a “utility relocation project with a bridge on it.” In addition to the structural challenges that JMT faced, the project included the relocation of water, gas, telecommunications, sewer, and electrical lines serving the Town. 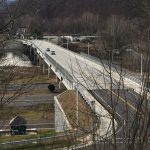 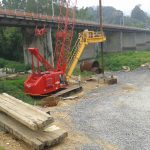 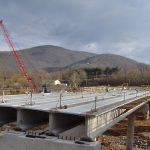 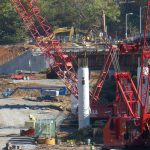 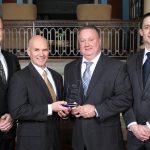 The Virginia Railway Express (VRE) Station Parking Lot, Master Plan & Site Access Improvements, performed by Johnson, Mirmiran & Thompson in Spotsylvania, Virginia, provided 1,480 parking spaces, including 26 handicap-accessible spaces, for commuters to access the VRE Station Platform. A bus loop and bays designed for passenger pick up and drop off for future planned bus routes, and “Kiss-n-Ride” drop off lanes were also included in this project’s design. The entirety of the VRE system removes what is equivalent to one additional highway travel lane each direction along Interstates I-95 and I-66. The new facility has become the southern terminus for VRE train service on the Fredericksburg Line, and is the first VRE commuter rail service extension since its operations began in 1992.

JMT used 3D modeling for grading the site and performing impact analysis to avoid excessive impact to adjacent wetlands that had over 30 feet of elevation difference in the area of the proposed parking lot. During the entire project process, all stakeholders, including VDOT and Spotsylvania County, aimed to limit environmental impact and ensure proper ADA accessibility. With the help of 3D modeling, these factors were addressed during multiple design layouts before construction. Energy efficient LED lighting was included in the parking lot lighting design, and will reduce energy use and maintenance costs. Conduits were installed so that a future ITS system may be installed, allowing commuters to check online for available parking.

During the project, JMT completed independent analysis which coordinated nearby planned development, multiple commuter usage, project coordination, design, storm water drainage system improvements, and complete right of way and construction plans, which included the new Signal at Route 17 and the Crossroads Parkway. JMT also maximized the proposed parking lot grading to meet the platform elevation and avoid incorporating retaining walls in the northern boundary wetland area, which reducing the borrowing needs of the project. This ultimately resulted in the saving of approximately $1 million for construction costs, which had been included in the County’s estimate. 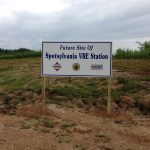 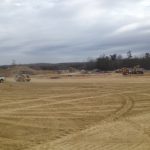 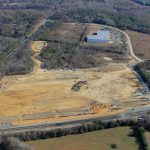 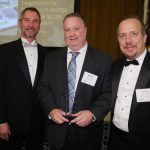 VHB developed several concepts that would yield 500 to 640 parking spaces, ranging in cost. After discussing the options, the client chose a sustainable permeable parking lot with a grass cover. This innovative approach uses a gridded GeoWeb system filled with open graded stone mixed with topsoil to allow establishment of the grass cover. This solution reduced the existing impervious area by 20,000 SF. Impervious areas prevent water from soaking into the ground and can contribute to water pollution and flooding. Instead of a large paved parking lot, which would create increased stormwater runoff during rain, the permeable lot allows rainwater to seep slowly into the ground. It also minimized the size of the required stormwater Best Management Practice (BMP) by providing stormwater recharge.

VHB and DNB exceeded the client’s expectations on many levels, from surpassing the required amount of constructed parking spaces within the budget, to improving site hydrology and eliminating localized flooding, to leading by example by implementing sustainable design. 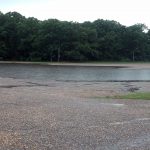 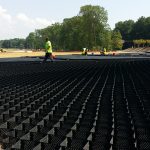 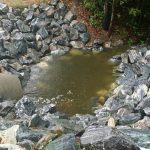 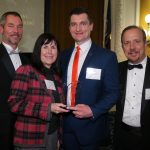 The T. Tyler Potterfield Memorial Bridge in Richmond, VA, connects the Three Days in April overlook on Brown’s Island to the Manchester Climbing Wall on the south bank, offering access to the floodwall path and the Manchester neighborhood. As part of the Hargreaves Associates team, VHB worked with Moffatt & Nichol to design a safe and attractive shared-use path across the James River, retaining as much of the historic structure as possible.

VHB developed a plan to wrap the shared-use path around the existing railroad embankment behind the Climbing Wall, using a design that meets both slope requirements for Americans with Disabilities Act (ADA) accessibility as well as radii requirements for bike lanes. The engineering firm served as the civil design engineer and environmental consultant, responsible for site/civil engineering, bike/pedestrian planning, shared-use path design, stormwater management, erosion control, permitting, and construction oversight for the bridge.

VHB’s environmental scientists conducted tree inventories, resource protection area (RPA) investigations, a water quality impact assessment (WQIA), and permitting to meet all Clean Water Act (CWA) regulatory requirements for the project. As a result, VHB was able to obtain all necessary permits from the U.S. Army Corps of Engineers (USACE), the Virginia Department of Environmental Quality (DEQ), the Department of Game and Inland Fisheries (DGIF) for permitting related to fish migration, and the Virginia Marine Resources Commission (VMRC). Due to the project’s proximity within the James River Park System (JRPS), invasive plant species will be managed using the JRPS Invasive Plant Management plan created by VHB in 2015. 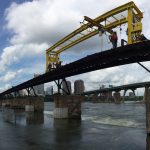 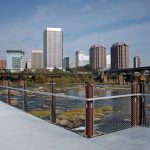 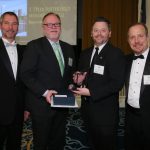